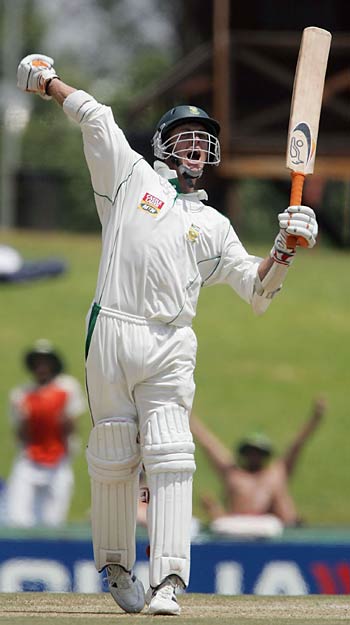 Andrew Symonds gears up for the semi-final against South Africa, St Lucia, April 23, 2007 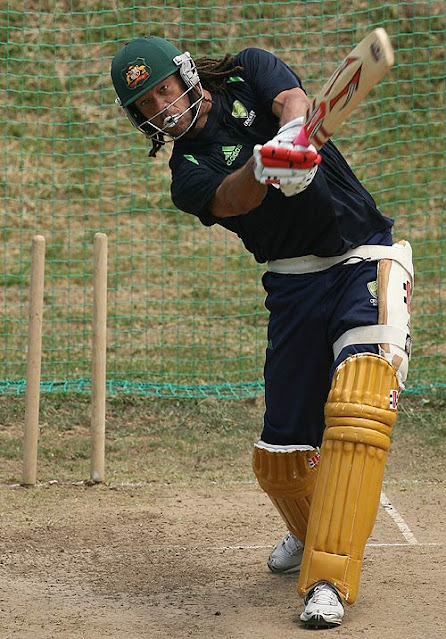 1952 at Lucknow, Pakistan recorded maiden Test victory in only their 2nd ever Test match beating India by an inns and 43 runs. 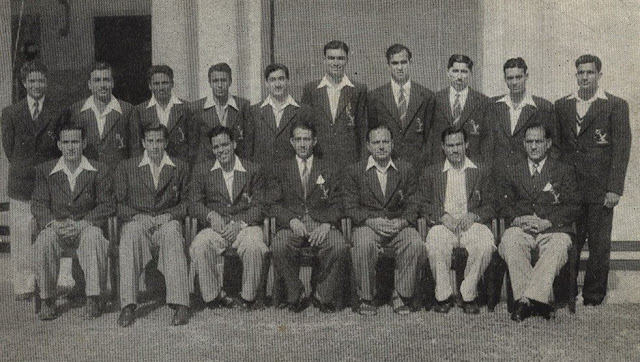 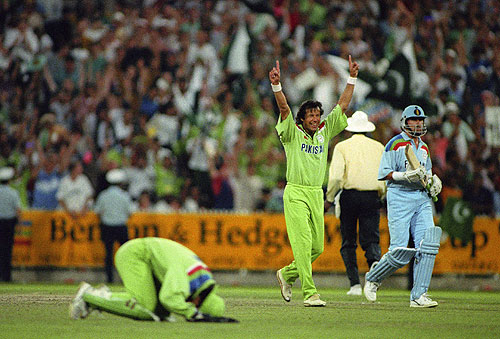 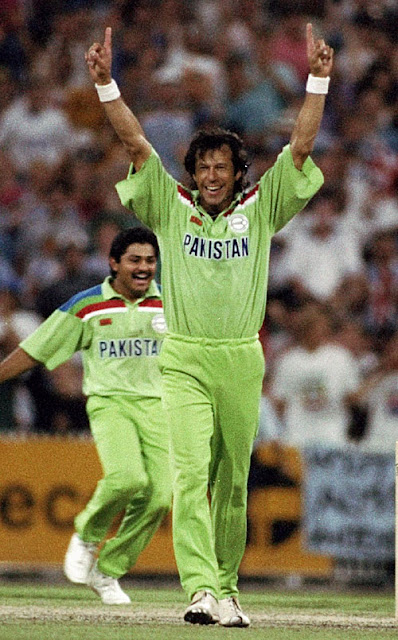 Dean Jones throws up on the pitch during his epic 503-minute double hundred, India v Australia, 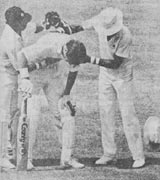 Mohammad Azharuddin with the Singer World Series Trophy 1994. This was his first one-day series victory abroad as captain 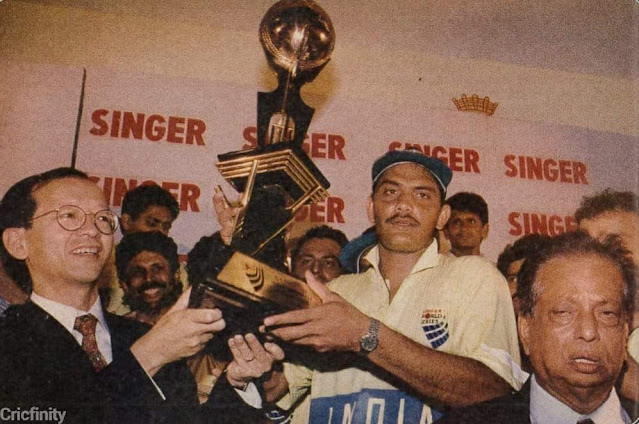 Email ThisBlogThis!Share to TwitterShare to FacebookShare to Pinterest
Labels: India

Bill Ponsford Australian Batsman bowled out in Test cricket with his best score, 266, against England at The Oval. 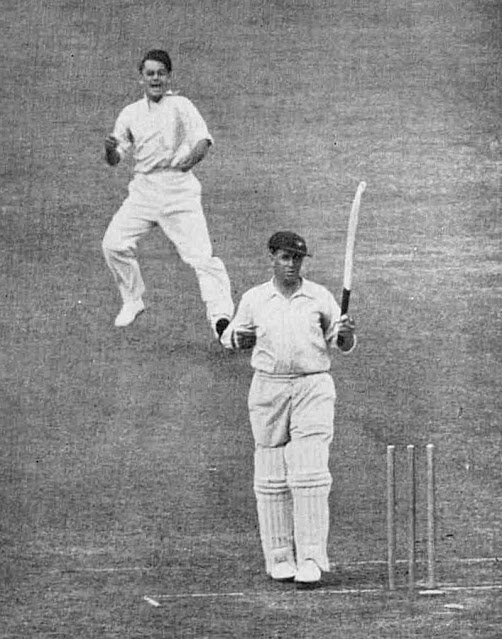 Well, spectators and historians know Eric Hollies are famous for keeping Bradman’s Test average under 100 but being an unwitting spoilsport belies the truth of a smiling leggie. Eric Hollies have an assured place in cricket history: as the party pooper of all time. And although it’s a story every cricket lover knows, it bears retelling. The date is August 14, 1948, and Don Bradman is making his final Test appearance, needing only four runs to achieve a much-awaited average of 100. As Bradman makes his way to the wicket, The Oval rises.

In the middle, the English captain, Norman Yardley, raises his cap, calls for three cheers, and then shakes the Don by the hand. The crowd falls silent in expectation. Bradman takes his guard and Hollies bowls him an orthodox leg-spinner. The next ball, a googly, is pitched slightly further up. It draws Bradman forward, he misses it and looks back to find his stumps shattered – the great batsman departs: unbelievable “bowled Eric Hollies 0.” There are many ways of looking at that historic event. The heart of Warwickshire, crowd ears was clamped to the radio, where John Arlott apparently spoke for the nation.

I wonder,” if you see a ball very clearly in your last Test in England, on a ground where you’ve played some of the biggest cricket of your life, and where the opposing side has just stood round you and give you three cheers, and the crowd has clapped you all the way to the wicket. I wonder if you really see the ball at all.” And Len Hutton added to the myth as he quoted Bradman saying: “It’s not easy to bat with tears in your eyes.” But we, in Warwickshire, had a different view. We knew that our man Hollies, the most cunning spin bowler in England, was simply too good for Bradman.

We also subsequently found out that Hollies, who had bowled Bradman 10 days earlier in a county game where he took eight Australian first-innings wickets for 107, was working to a plan:  So, my simple principle was I’ll bowl the googly second ball,” Hollies told Tom Dollery before leaving for The Oval, “just in case he’s expecting it first one.” As for the theory that emotion overcame Don Bradman, Jack Crapp, who was fielding at first slip, seemed to demolish that when he told Frank Keating: That bugger Bradman never had a tear in his eye his whole life! Whatever the truth, Eric Hollies was always schoolboy hero: not so much because of his deeds for England as for the way he played cricket for Warwickshire. He was the ultimate professional, regularly bowling more than 1,000 overs a summer.

Long before Shane Warne was born, Hollies showed that a leg spinner could combine devastating accuracy with guile. However astonishing to think that in a long, war-interrupted career that lasted from 1932 to 1957 Eric Hollies conceded only 2.23 runs per over. But, above all, there was an innate cheerfulness about Eric Hollies. Again like Shane Warne – though without highlights – he was a stickily rotund, fair-haired figure who looked as if bowling was a pleasure and nature’s gift, not a punishment. As Cardus once said of Johnny Briggs, the Lancashire bowler:  He had just to show his face and light passed over the field and with it a companionable warmth.” Nowhere was Hollies’ humor more apparent than in his batting.

He was one of the game’s legendary rabbits who in his first-class career took more wickets (2,323) than he scored runs (1,673); it’s a melancholy thought that he wouldn’t stand earthly of getting into today’s multiskilled England side. But one can still hear the ironic roar that greeted Hollies every time he came out to bat. His walk to the wicket was mock-triumphal progress. On reaching the crease, he would solemnly pat the wicket. You know, in those days wickets were always uncovered and occasionally bumpy – with the back of his bat, in imitation of a real batsman. On one famous occasion at Worcester, finding all the fielders clustered close for his arrival, he handed his bat to the umpire and unobtrusively crouched down in the leg-trap.  Humour was also for Hollies a form of protection.

Eric Hollies had a spasmodic career for England, first playing against West Indies on the 1934–35 tour. And, after his heroic deeds at The Oval in 1948, he played against the New Zealanders in 1949 and West Indies in 1950. That, and another brilliant Warwickshire season where he took 117 wickets at 18.13, led to his selection for the 1950–51 tour of Australia and New Zealand. But he was constantly passed over for the Tests in favor of the kangaroo hopping leggie Doug Wright. One baking-hot day at Sydney, ignored by his skipper Freddie Brown and fielding down by the Hill, the locals barracked Hollies. “What’s the matter – don’t they bury their dead in Birmingham?” someone shouted. “No, they stuffed and send out to Australia,” was Hollies’ reply, and from that moment he had the Hill in the palm of his hand.

Many still see now the Hollies smile But like to remember Hollies in his pomp, in the great 1951 Championship-winning Warwickshire side. He took 145 wickets in that memorable summer. With his Brearleyes que captain Tom Dollery, was the team’s linchpin. One can still see now the Hollies smile, the deceptively slow amble up to the crease, the ingenious mix of orthodox leg breaks, top spinners, and googlies. And I recall one particular, late-July match against Yorkshire where Hollies took nine wickets in all and where the aggregate attendance, according to Wisden, was an astonishing 43,000. That was the county game at its best; and for me, Eric Hollies, affable as Falstaff yet full of the leggie’s cerebral cunning, was the perfect embodiment of the winning spirit of Warwickshire cricket. 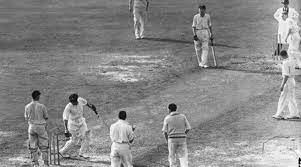 West Indies win by 10 wickets to wrap up the series 2-0. New Zealand accuses West Indies of aiming at the body. Jeremy Coney gets arm broken, Jeff Crowe scores a century. However, Malcolm Marshall is named man of the series with 27 wickets 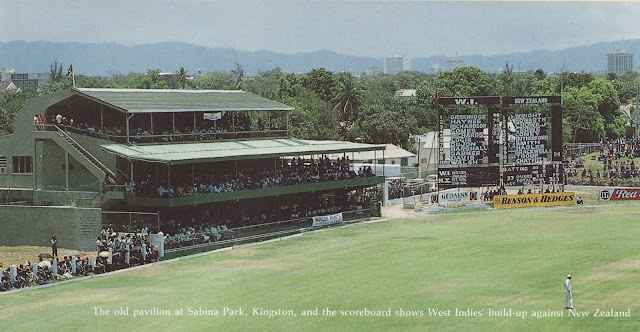